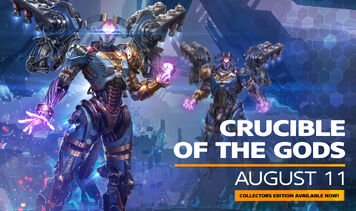 Today the Allods Team, Obsidian Entertainment and My.com announced the first major update to Skyforge named "Crucible of the Gods". This update will arrive in Aelion on August 11th, 2015. It will include bug fixes, new content and feature enhancements. For all of you striving to become Gods, comes even more awesome news. The ability to unlock Divine Form! Players will need to complete a storyline quest called "New God" that becomes available around 30.5K Prestige. This will allow players to access high-end activites including Invasions and Raids.

To read all the lucious details in all their divine glory, check out the news article featured on the Official Skyforge website!

Crucible of the Gods

Retrieved from "https://skyforge.fandom.com/wiki/User_blog:Pinkachu/Skyforge_Celebrates_It%27s_First_Major_Update?oldid=8305"
Community content is available under CC-BY-SA unless otherwise noted.