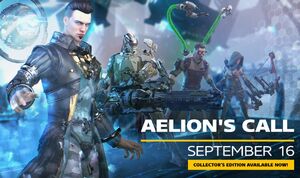 Aelion's Call is the second major update for the NA version of Skyforge.

This raid will feature the Army of the Mechanoid and the Phytonides Army as players explore a crashed ship that had crash landed on Aelion's surface during a failed invasion. The Mechanoid have since reactivated and the ship has been overgrown by the Phytonides.

This system has been added to assist low prestige players who have either just started playing, or have returned to the game. The system allows for faster progression through promo adventures allowing players to progress at a faster rate. As players grow higher in prestige, the system will decrease the rewards resulting in a small gap between them and veteran players.

This is a brand new type of content for up to 40 players. These are available during Invasions and players will be able to earn Signs of the currently invading army by completing any adventure that is primarily occupied by that type of mob. Earning Signs will complete the players personal operation goal and increase their chance of claiming a top spot among the group. The more signs that are collected, the higher the teir of rewards. Signs are used to unlock node in a new level of the Ascension Atlas specific to each invasion army.

There is also a very long list of patch notes explaining all the bug fixes, class update and balances, Pantheon changes and much more. For a complete list of the patch notes, you can visit our Aelion's Call article or visit the Official Forums .

Retrieved from "https://skyforge.fandom.com/wiki/User_blog:Pinkachu/Aelion%27s_Call?oldid=13014"
Community content is available under CC-BY-SA unless otherwise noted.