Army of the Seas

Nothing is sacred to the sea creatures - the remnants have attacked Thais Temple! Please help the goddess! She is defenseless against the invaders.

Thais Temple is a 3 player squad adventure. Thais Temple, located on Naori Island, was a house of worship for the Goddess of Love & Beauty Thais. However, the Oceanides moved against all of Naori Island and seized the temple- slaughtering devout worshipers and visitors alike. Now, it is up to the Immortal to help remove the threat of the Army of the Seas, and return Thais Temple to its former glory.

Upon entering Thais Temple, the Immortal will be tasked to cleanse the temple; appearing in the aftermath of an invasion, with the bodies of humans strewn about.

The Rough Sea Naiad will attempt to create a mitigating bubble that affects all allied mobs, making them take decreased damage for the duration of the shield.

After dealing with several packs of mobs, the player(s) will come to meet the Sea Horror Horrus - the first boss of Thais Temple. Horrus will use two abilities to defeat the Immortals. Patriarch which causes Horrus to lay an egg and cause it to hatch rather quickly, should the Immortals not defeat it before it is able to hatch, summoning a control-type Khelp which will attempt to crowd control the player(s) with a conal fear attack. The second of Horrus' abilities is a damage-over-time ability, where he places his tentacle eels upon his enemies. In order to remove this damage-over-time ability, the player effected must dash.

The next boss to be encountered is High Naiad Hesione. Hesione will summon a number of whirlpools during the fight, that charge up quickly to release a heavy damage blast to those standing within it.

All that lies between the players and the last boss of Thais Temple is one Foamy Tides Ong. After dealing with him, the players will encounter the final boss: Sea Lord Protheus.

The fight begins with Protheus remaining out of the battle. Using his ability Massive Summoning, Protheus calls forth the Khelp of the Oceanides to defeat the player(s). Four waves of Khelp will appear, beginning at the front, left, right and then front once more of the fight.

Once players have defeated the first massive summoning, Protheus will enter the fight. He is weakened, after the first summoning. During this time, players may attack him for normal damage. His weakened state lasts for 8 seconds; after 8 seconds, he will rise with his Water Barrier in tact. The Water Barrier causes Protheus to take significantly less damage than before, and it is advised that players cease attacking Protheus and turn their targets onto the next Massive Summoning he performs. As defeating the summoned minions will cause Protheus to become weakened and vulnerable again.

During the first phase of the fight, the summoned Icy Abyss Khelp perform autoattacks and bubble blasts that do massive damage, if the Immortal should stand in them. All the meanwhile, Protheus will attempt to perform Powerful Strikes. A melee attack that deals fatal or nearly fatal damage to any player caught.

Once the player(s) have decreased Protheus' HP enough, he will change stances and move into phase two. During this time, Protheus' attacks are no longer Powerful Strikes, but Lightning Strikes instead. These Lightning Strikes are just as dangerous as the Powerful Strikes, however they are ranged and are telegraphed across the arena with a neon blue line, showing the trajectory of the blast.

In the second phase, Protheus will summon two Storm Guard Naiads instead of two Khelp. These Naiads will create water waves that severely slow any target who is hit by them, and a moderate amount of damage. Just as with the first phase, players must eliminate the Naiads in order for Protheus to become vulnerable once more.

An egg appears next to Khorrus that 12 seconds later releases a Khelp. The lower Khorrus's health, the more eggs it summons. Ranged ability.
Frequency: 22 seconds.

Sends several Morays towards the target. The Morays start to rush around the target, inflicting damage over time for 10 seconds. To escape the Morays, use Dash. Ranged ability.
Frequency: 18 seconds.

Over the course of the fight, Hesione inflicts more and more damage with Basic Attack. Ranged ability.
Frequency: 10 seconds.

First, protheus summons Khelps but remains out of reach. When he joins battle, protheus keeps summoning minions, spending some of his power and thus becoming vulnerable for 8 seconds. Ranged ability.
Frequency: none. He summons new ones when the previous ones are defeated.

Protheus summons two Naiads that can slow the enemy down. Ranged ability.
Frequency: none. He summons new ones when the previous ones are defeated.

Protheus, hidden behind the barrier, takes significantly less damage. Melee ability.
Frequency: none. He remains behind the shield for most of the fight, dropping it only when summoning minions.

A statue of Thais. 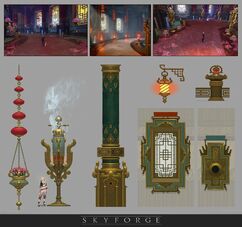 Concept art
Add a photo to this gallery

Retrieved from "https://skyforge.fandom.com/wiki/Thais_Temple?oldid=15069"
Community content is available under CC-BY-SA unless otherwise noted.