Skyforge is a free-to-play AAA Sci-Fi Fantasy massively multiplayer online role-playing game, with a spectacular action combat system, set in a world where fantasy meets Sci-Fi and ancient mysteries live side by side with cutting-edge technologies. Skyforge transports players to a stunning universe where mortals and immortals fight for survival against invading gods and their armies.  This game is currently in Open Beta. This is considered a 'soft launch' as no characters wipes are expected. Official launch date not yet announced.

It is being developed by Allods Team and brought to NA/EU by Obsidian Entertainment and My.com. 13 character classes will be available at launch with possibly more in the future. The game features a non-level based progression system, that instead focuses on talents and abilities while allowing several ways for the player to advance their character.

From the very first minute the player steps into the world of Skyforge, their  character is immortal, but they have a long way to go before becoming a god. Like the heroes of ancient myths, the character will need to perform a great deal of feats and overcome many trials and adventures to gain the faith of many followers and become a new deity of Aelion.

That is what the first adventures in Skyforge are about; improving skills and attributes to develop the character. Your Order will allow you to gain followers and their faith - the resource that is used to create miracles. Your adventures on Aelion will eventually let you awaken your divinity.

Being a god in Skyforge is not just a series of tests. Power and might come with responsibility and you must care for your followers and protect Aelion! When your character assumes the divine form, they surpass other immortals in terms of destructive power, as well as resistance to control, damage and other manifestations of aggression among opponents. They will also be visually different, which is something the community often asks about: in the divine form, the character is physically much bigger than the other immortals, and can choose a unique appearance.

Depending on the chosen classes and talents unlocked in the Ascension Atlas, a newly-fledged deity acquires special abilities that allow them to turn the fight around. Tanks can draw the enemies away from their allies, support classes give immunity and increase movement speed, crowd control classes can immobilize all the enemies, and damage dealing classes are capable of destroying everything from a distance or in close combat in a single "spell".

If your character has mastered many classes, their powers are even greater! Switching between classes in combat is another advantage of the divine form.

Finally, gods are able to heal during the fight, which is something the mere immortals can’t do.

The Divine form is an attribute of gods. When you become a God you gain access to a new, divine layer of the Ascension Atlas which allows you to improve your already impressive advantages. And the might of the invasion gods coupled with legends of Aeli clearly indicate that the limits of "elder gods" stretch much further than those of the newly awakened gods!

Whether you become a caring patron that sways the destinies for the good of Aelion, or a calculating and selfish deity who treats mortals and their prayers as a fuel source for their powers is completely up to you.

For more information on the game and how to play, see our Getting Started beginner's guide!

Founder's Packs are no longer available. Collector Editions are currently available at Sf.my.com 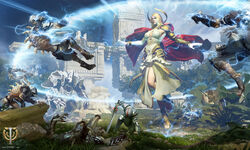 Retrieved from "https://skyforge.fandom.com/wiki/Skyforge?oldid=14876"
Community content is available under CC-BY-SA unless otherwise noted.