Pantheons are unions of players, similar to clans or guilds in other online games.

One player can start a Pantheon for 50,000 Credits. The Founder of the Pantheon then has 7 days to find another two members. The Pantheon will be disbanded, and funds not refunded, if this deadline is not met.

After joining a Pantheon, adepts can be sent to special pantheon missions, where they can gather Construction Resources. These resources are needed to advance development. Since the amount of needed resources is tremendous, pantheons are forced to gather lots of immortals to achieve them in a reasonable time.

Players are given the incentive to join and help a Pantheon thrive by contribution, whether it's resources, time or by completing missions, or all the above. In return, the player receives bonuses to their stats, new abilities that improve defense, better crowd control and damage output as well as useful items for their adepts among other bonuses which can only be purchased with special currency. This currency is obtained through rewards from participation in Pantheon Wars and other Pantheon activities.

Leaders are called Commanders and have the same Rank of authority as the Founder. The only thing they cannot do is remove the Founder from the Pantheon.

Pantheons must have 3 Commanders minimum, and are allowed to assign up to 15 Commanders. A Commander that is offline for 3 weeks will automatically demoted back to Member. If the number of Commanders falls below the minimum the system will assign the position based on earliest join date of a member that has signed in within the last 48 hours and has been in the Pantheon at least 7 days.

Players cannot participate in Pantheon Wars or Distortions if they have been in the Pantheon less than 7 days. Players that leave a pantheon or are expelled from one are also unable to participate in pantheon activities for 7 days.

The Stronghold is the main structure of the Pantheon and resembles the overall progression of your Pantheon. The Research Center and Fort are prerequisites required to unlock specific Pantheon structures and features.

"Allows you to participate in Pantheon Wars, as well as assign Legionnaires."

"Sanctuary is a challenge to others. The pantheon that builds it proclaims their intention to fight others for the territories."

Both a Rank 1 Sanctuary and a Rank 1 Training Hall are unlocked once the Rank 2 Fort is completed in the Stronghold.

Supplies all buildings in the pantheon Stronghold with energy.

The Improved Condenser delivers a fixed amount of 1000 energy per rank. Energy level listed in the Table below shows how much is provided at that particular rank.

"Additional coolers will allow you to 'speed up' the power unit, which results in an increase in energy output."

The Converter transforms part the Prestige of pantheon members into energy for pantheon structures. It delivers 1 point of energy per every 600 prestige from every pantheon member, rounded down to the nearest whole number.

Please note that a member with 600 to 1199 prestige still provides only 1 energy from, and that a member 599 or less would provide zero energy, from the Converter.

"Unusual but extremely effective technology. It lets the gods turn their power into energy."

Enables the ability for the pantheon to participate in Distortion (10 Player) adventures.

"This device locates distortions of space that harbor enemies."

Distortions can be locked by a Pantheon Commander from the Divine Observatory globe map that has access to that particular Distortion.

Note: Distortions will need to be saved after every Wednesday limits reset. Changing a locked Distortion for the week, or adding one beyond the free ones, costs an additional 1 000 000 (1 million) Credits each.

Provides access to additional resources used in the order missions. You can find these items in the Pantheon tab of the Market.

Each Analysis Department rank adds to the Market higher quality versions of additional resources for the order missions, which can be purchased for Victor's Medals.

"Specialists of this center supply the order with equipment that makes the missions for adepts easier to complete."

"They are not simply suppliers that find and deliver the goods. They are masters of their trade."

Obelisks in the Triumph Square unlock special talents for the pantheon members.

Luck: Resplendent statue of the Goddess of Luck contains a variety of devices that process part of Faith into Luck for all Pantheon Members

Strength: This magnificent statue embodies might and strength. But that is for mortals. The immortals see it as a technological device that makes them significantly stronger.

Valor: Designed by the pantheon architects, this statue fascinates mortals and immortals alike. Everyone knows the beauty that surrounds it.

Spirit: There is no secret technology behind this statue's appearance. But it does raise the spirit of everyone who sees it.

Though all 4 Obelisks can be upgraded individually, the Triumph Square comes with Rank 1 Obelisks of each type, so the minimum energy consumption of the triumph square is 3000 energy when enabled.

A member of the Pantheon can get the bonus for each Obelisk by purchasing them for Victor's Medals from the Pantheon Talents sub-menu under the Stronghold menu.

Provides the Pantheon members daily with Energy Modules for the Research of invading armies.

"This creation of Flavius's supplies warriors with materials for researching the hostile influence of invading forces."

"A very complex device. Aside from Flavius, no one really knows how it works. But it has proved to be extremely useful."

Note: Pantheon Wars content is on hiatus until the developers overhaul it at the end of 2016.

One of a Commander's primary tasks is to prepare their fighters for the Pantheon Wars – weekly battles held between members of opposing Pantheons. These battles include PVE missions as well as PVP battles. Wars involve up to 100 players from developed Pantheons and they are divided into two groups. 50 fighters are send to PVP battles and another 50 are sent to take part in PVE trials. God forms are allowed in these battles and are even encouraged. If the battle is won, the victors gain control of a specific territory for a week. This territory generates income and provides unique rewards for the Pantheon members like enhancements to the upper Rank of their Ascension Atlas, unlocking special costumes and vehicles and access to credits, Sparks and consumable resources. 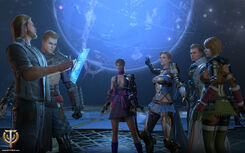 It was on the Pantheon page at the official website. Not sure if it's related at all actually.
Community content is available under CC-BY-SA unless otherwise noted.