Being of a martial order, a monk has mastered the discipline of body and mind. Wielding their staff,  a monk fight using several special stances, enabling them to perform dizzying acrobatic feats and deliver powerful blows against their enemies. Each stance is tailored to provide different advantages, and a monk will want to switch between them depending on what they are fighting. Earth stance is best suited when fighting a single foe, while fire stance is a better option when fighting several enemies. Wind stance provides maximum agility, allowing a monk to mitigate damage.

The Monk's main weapon is the Weightstone with clubs, blades, or spikes at both ends.

In their additional weapon slot the Monk has equipped a Combat Pole. 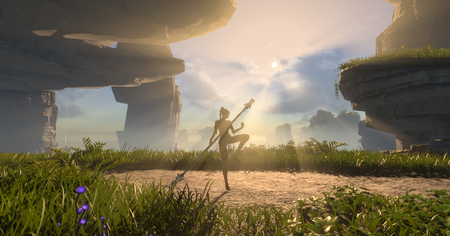 Fire Stance - Heart Of A Phoenix

Wind Stance - Enraged Harpy
Add a photo to this gallery

Retrieved from "https://skyforge.fandom.com/wiki/Monk?oldid=15231"
Community content is available under CC-BY-SA unless otherwise noted.