Start a Wiki
Mare Sacro Monastery is a 5 player group Adventure. The Mare Sacro Monastery was once a thriving monastery devoted to cherishing the gods of Aelion- that is, until it had been ravaged by the might of the Oceanides and flooded by the rage of a Water God - presumably Protheus. But now, as the Immortals work to clean up Aelion, the remnants of the angered past remain. Of whom two notable figures remain to protect their new claim: High Naiad Leida the Conqueror and Depths Warden Cetus. It is the duty of the Immortal to cleanse the monastery of the Oceanides in order to protect Aelion.

The player(s) will enter the dungeon with quite a bit of mobs to go through before reaching the first boss, Depths Warden Cetus.

The first mobs the Immortal(s) encounters are Dark Waters Khelp & Icy Abyss Khelp. Be wary of the Icy Abyss Khelp's ability to create a bubble blast- dealing a hefty amount of damage in a radius.

Once the Immortal(s) moves through the packs of Khelp, the next unique pack will contain not only Dark Waters Khelp and Icy Abyss Khelp, but also Roaring Wave Naiads. The Naiads will cast water globules that deal heavy damage to all players caught in its blast. To avoid being caught in the blast, the player(s) should observe for any puddles of water forming beneath their feet.

In the next area, the Immortal(s) have a number of paths to choose to progress. The most common path is the path closest to the right of the gate. In this area, players should be cautious of pulling the Icy Abyss Kraken. They are large hulking beasts that patrol the paths available, and when killed will respawn in some time. It would be wise that the players attempt to pull mobs away from the patrolling paths and into safe fighting zones. Common practice is to pull the mobs into the side paths, or into the entrance area of the first gate.

The mob packs located along the paths may contain a combination of Dark Waters Khelp, Icy Abyss Khelp, Roring Waves Naiads, and Stormy Wave Naiads. Once you have eliminated enough mobs the next gate will open for the player(s) to traverse through.

The next mobs the Immortal(s) will encounter consists of Dark Waters Khelp and Foamy Tides Ong. Be wary of the Ong when it charges up to unleash an AoE. The subsequent pack of mobs will include Rough Sea Khelp and another Foamy Tides Ong. The Rough Sea Khelp casts a conal attack which does heavy damage to those caught in the blast. At this point, the first boss will begin sending waves of Dark Waters Khelp in packs of three down the long hall. However, there is still a static pack of mobs (containing Icy Abyss Naiad & Foamy Tides Ongs) the player(s) must eliminate to get to Cetus. In order to avoid mixing the two, the Immortal(s) can pull the next mob pack further back passed the path of the patrolling Dark Waters Khelp (which slowly despawn once they reach the end of their path). Once eliminated, players have the choice of bolting passed the oncoming waves of mobs being sent by Cetus, or running in between despawns and respawns, or simply taking the Khelp head on.

The player(s) will then reach Depths Warden Cetus - the first boss of Mare Sacro Monastery. During the fight, Cetus will continue to spawn adds which should be dealt with by AoE & kite tactics. Occasionally, Cetus will attack players by placing a DoT on them (signified by the small fish attacking a player) which can be removed by dashing. Players should be wary that Cetus will sometimes summon Icy Abyss Khelp which will try and use their bubble blast to eliminate players. Once eliminated, the next gate will open to the final boss, but there are many Dark Waters Khelp just before her. The room can be mass pulled by the Immortal(s) if they have strong AoE.

The final boss is the High Naiad, Leida the Conqueror. The fight is rather simple: in the first phase Leida will summon Geysers near the player(s), these Geysers will erupt with a jet of water that do medium damage to any player standing on the Geyser. In the second phase, Leida will cast a shielding bubble around herself that makes her invulnerable and damages any player(s) that enter the bubble. She will also summon two Naiad Illusions. These Illusions will cast a spray of water at a specific player, which will be shown by a blue arrow pointing at that specific player. It is advised that the player not stand near other players and continue moving to dodge the spray. Once both Illusions have been destroyed, Leida will release her shield and continue summoning Geysers. Phase one and phase two will be repeated until Leida has been defeated.

The first gate the Immortals face in the Mare Sacro Monastery.

The hall in which Leida the Conqueror and her Khelp lay. 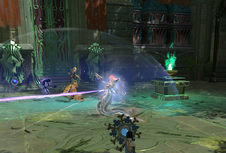 A Naiad Illusion positioned inside of Leida's shield.

The telegraph informing the player they are being targeted by a Naiad Illusion's water spray. 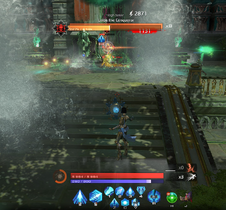 Retrieved from "https://skyforge.fandom.com/wiki/Mare_Sacro_Monastery?oldid=11617"
Community content is available under CC-BY-SA unless otherwise noted.