The Lanber Forest is a picturesque, bright corner of Aelion. An oasis of pristine nature, hidden away from the frenzied rhythm of Aelinar and the hum of factories. It seems quiet and peaceful here, but that peace is an illusion.

The farms are empty, as though the farmers simply walked away from their fields. The town of Kyris is also quiet. Once a popular, bustling place, for trade and festivities, it’s no longer filled with the carefree laughter of fairgoers or the rhythmic thud of forging hammers. You will not meet a single traveler in the town, or on a forest trail. Clear skies and the pastoral landscape are only a mask for the evil that lurks in the Lanber lands.

The illusory tranquility does not fool the immortal warriors who defend this world. In the heart of the capital, in the Divine Observatory, the Aelion projection is flashing with pleas for help from the mortals of the Lanber Lands. The pleas bring dark news about the reappearance of the Mantide army. This evil, defeated by heroes of a past age, has been awakened from centuries of sleep and seeks to spread throughout the planet, destroying the unwanted and dominating the weak. War has begun.

And where there is war, there are vultures. The Lanber Forest has been swept by opportunists: looters, smugglers, evil men, who have decided to cash in on the grief of others.

The Mantide presence in the Lanber Lands is not a new invasion nor is it evil from another world, it is the act of a traitorous god. Weak and hungry for the strength the Mantide have promised, Nerion, once the patron of the Lanber Lands, has betrayed and sold out his people forming an alliance with the Mantide army. He has condemned his followers to horrible deaths…or, even worse, an agonizing existence in the clutches of these monsters.

Now Nerion’s Castle, which towers over the forest, no longer symbolizes divine protection. Instead it reminds people of a shameful betrayal by the one they once looked to for protection.

The Defenders of Aelion have sent many brave warriors to the Lanber Forest. However, the vanguard of the divine forces need help. Their primary task is to stop the treacherous god, but what is also important is to save people: to provide food and safety, rid them of the invaders, and to protect them from the sickness and lawlessness that accompany conflict. The lands of the Lanber Forest are waiting for a savior!

Tales of the Lanber Forest 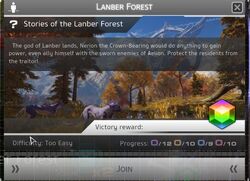 Monestary Grove
Add a photo to this gallery

Retrieved from "https://skyforge.fandom.com/wiki/Lanber_Forest?oldid=7839"
Community content is available under CC-BY-SA unless otherwise noted.