Hostile Territories (also known as Anomalies) are a high-end type of content. They are open areas that contain creatures left over from previous failed invasions. These areas contain Ether Resonators - an incredibly dense power source. Hostile Teritories require groups of five players and can be accessed from Tessa Temple (aka Tessa's Sanctuary per the quest). It is not required to be in a Pantheon to access this temple and it is used primarily for players to congregate and either start or be invited to a group.

After players have assembled a team, they will be able to teleport to an Anomaly and access an unoccupied Resonator. Killing targets near the Resonator will fuel it, and start the production of valuable resources. These resources can be collected by players and used immediately upon completing the current quest, or stored and added to the resources they obtain from the next Resonator. To aquire better rewards, players will need to go deeper into the Territory and advance into the 'heart' which is located inside a Subterranean temple. The further into the depths players go, the stronger and more productive the Resonators and the more deadly the creatures that surround it. Rather than kills specific groups of mobs, players may instead choose to be tasked with the destruction of powerful bosses to complete the quest.

Monsters inside the Hostile Territories will drop an abundance of Trophy Fragments or Equipment. The fragment quality may vary. The Resonators themselves, once players have chosen to 'cash out' their rewards, will convert the energy it has accumulated into large amounts of Sparks of Evolution that can be used to advance the class Ascension Atlas .

In order to fight and defend themselves against the monsters inside the Hostile Territories, players will need to have an essential stat called Tactical Sense . Players can increase this stat by collecting upgrade items from raid adventures. The stronger the monster, the more Tactical Sense is required to defeat them.

Completion of the Hostile Territory quests awards players with Sparks of Revelation which are used to unlock related nodes in the Ascension Atlas.

Ether Resonator
Add a photo to this gallery 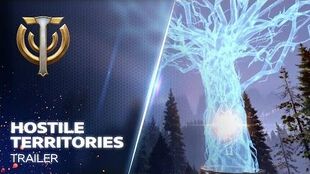 Skyforge - Hostile Territories Trailer
Add a photo to this gallery
Retrieved from "https://skyforge.fandom.com/wiki/Hostile_Territories?oldid=14628"
Community content is available under CC-BY-SA unless otherwise noted.