As long-ranged weapon's expert, a gunner tirelessly study and improve their weaponry, optimizing it for raining down chaos. Remorseless, they have no qualms about putting their destructive technology to use and blanket the battlefields with bullets, super-heated plasma and explosive rockets.

A gunner's weapon is the Hand Cannon. It is a multi-purpose weapon which can be used in three different ways.

Plasma rifle
The second mode is plasma rifle, which gives access to energy type attacks like Pulse Shot, Plasma Beam and Plasma Field. Most of these attacks consume - and require - the heat built up in machine gun mode.

Missile launcher
The third mode is missile launcher, an immobile stance which gives access to missile and mine attacks like Missile Salvo, Homing Guidance System and Mine Ring. All missile launcher attacks consume projectiles which slowly regenerate over time to a cap of 15 (20 with the Expanded Ammunition talent).

In their additional weapon slot the Gunner can have a range of different Cartridges which gives the hand cannon different benefits. 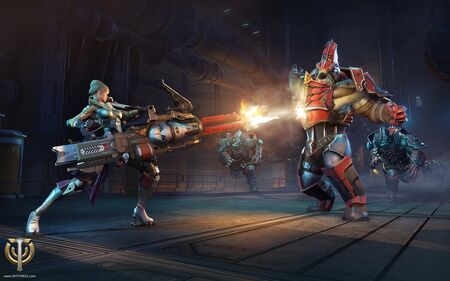 Retrieved from "https://skyforge.fandom.com/wiki/Gunner?oldid=15199"
Community content is available under CC-BY-SA unless otherwise noted.