Note: This ability is often referred to as God form. The node itself is called God's Form and the actual ability is Divine Form.

The Divine Form is available to the player once he or she clears all adventures on the path in the provinces tab. Once the player does it a quest will pop up for the Divine Form. Players who have unlocked the Divine Form will gain their first divine abilities and select their Divine Form's future appearance.

During this new level of progression, players will be able to use their new Divine Form in certain types of Adventures (battling avatars of hostile gods) Raids, Pantheons and more. Other options will become available when characters gain access to a special Faith resource. This resource is fueled through specific game content.

The Divine Form is much more powerful than the standard immortal form. The player's character can grow up to double in size and their movement speed, range of attack and damage output increase tremendously. Health does take longer to regenerate but they are able to take an increased amount of damage. While in Divine Form, the player can switch to any class they have unlocked at any moment, even in the middle of combat.

Characters who are defeated in the Divine Form or who deplete their Faith resource will revert back to their immortal form. They will also revert in 15 minutes if neither of the other conditions are met.

Characters with an unlocked Divine Form will have access to a weekly quest where they can fight together with other immortals against a powerful monster. These battles will take place near special altars in open zones. Players will also receive a Halo to be worn on their heads much like the other gods, in order to show their newly achieved divinity - a step from just an Immortal to a fully fledged god.

These are divided into 5 groups:

Altering the laws of the universe and warping space itself, the god creates a black hole above themselves, pulling in nearby enemies. Over time the hole grows larger, pulling more and more helpless targets in until eventually it explodes, hurling them in all directions.

The god summons a fast growing vortex filled with bolts of lightning which strike at groups of enemies. After a few seconds, enemies find themselves at the center of this storm, where they take incredible amounts of damage.

The god becomes invulnerable and deals increased damage for a period of time. This effect also spreads to nearby allies. The enemies around the god are brainwashed into fighting for him or her.

The god launches a lightning into the sky, and a few moments later it strikes all nearby enemies, inflicting massive damage. When the effect ends, at the point where the lightning hit the ground an explosion occurs, producing damaging shock waves.

The god envelopes themselves in a deadly wall of flames before setting everything in its path ablaze.

Additionally gods gain three combat abilities that can be used outside of their Divine Form which consumes Faith, a resource gained from followers.

Players will be able to prioritze their specializtions depending on their gameplay style. These are unlocked Using Divine Revelations obtained from an Invasion's leader, an Avatar of the invading army's Greater God. These nodes are found in the Divine Atlas that becomes available once the Divine Form is unlocked. Eventually you will be able to obtain them all. All of them boost your stats in certain circumstances, and make your Ultimate Abilities stronger.[1][2]

Sparks of Evolution are required to unlock nodes in the Specialization atlases.

Once all 6 Specializations are unlocked, you become an Elder God, one of the strongest beings in all of Aelion and an equal to Ianna in power. 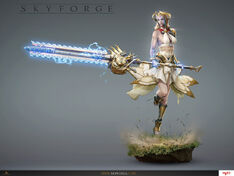 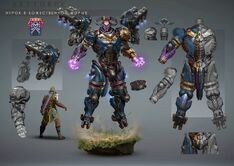 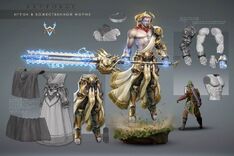 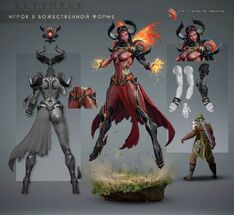 Demonic Divine Form
Add a photo to this gallery

Retrieved from "https://skyforge.fandom.com/wiki/Divine_Form?oldid=15193"
Community content is available under CC-BY-SA unless otherwise noted.