A Vird pack was spotted close to one of the farms. We have already evacuated the residents, all but one family on the outskirts. These people need help and protection.

This is a 'protect and defeat' squad adventure. Players are put on a timer and are required to defend a specific amount of residents against the continuous waves of vird. Each wave has a set number of enemies. There is no 'boss' but the closer players get to the end of the adventure, the faster the vird spawn. If a player is defeated, the respawn point is inside the farm and they will be able to continue fighting. The mobs will not reset.

The sole objective is simple, defeat wave after wave of enemies until you achieve completion of this squad adventure (around 15-17 full waves)

Note: These are always the same, no matter what difficulty this adventure is selected in, and the 40 minute situation timer does not change these objectives at all. 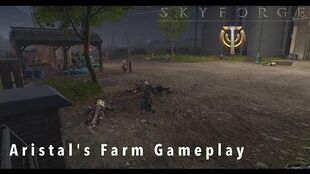