Start a Wiki
Note: Invasions have not yet been added to the game, they will be released with Update 0.65, Crucible of the Gods, in August 11th.

There was a time when Aelion could be called a paradise, but the never-ending alien invasions took their toll on the planet. The invasion of the sea army altered the coastline forever. The invasions of other gods permanently affected the climate in some zones and altered the animals that originally inhabited Aelion. It is hard to believe, but Aelion’s icy wastelands were once lush, blooming gardens, where thick grass covered the land like a carpet of green. And, to this day, Aelion and its inhabitants live in the shadow of danger, as the enemy gods continue their attempts to take over the planet. The only ones who can stop these invasions are the young gods who have no intention of giving up their home world without a fight.

Alien Invasions are events of incredible scale that affect all players and occur in several stages. First, the defenders of Aelion will fight off hordes of invading monsters; but over time, the invasion will grow and defenders will be overrun by more dangerous creatures from the most distant corners of the universe. Invasions do not happen all the time, so if heroes want to make a name for themselves among their fellow fighters, they should not leave heroic deeds till later.

Whenever there is an invasion, Aeilon’s young gods will be notified through the Divine Observatory’s warning system. Reckless players will rush into action, trying to save the planet from attacking monsters, but they must be well aware that they will not face the pitiful remnants of the previous invasions. They will be facing a formidable combat force, which means that haste will do no good. They need to be well prepared, so they should pick the best fighters for their teams before setting off to defend their world against monsters. And, they must remember to collect trophies – alien creatures often carry useful and valuable items and relics with them.

Once the main invading forces on Aelion have been defeated, and you feel like you are ready to meet the avatar of a hostile god face to face. Gather your strongest allies and board the alien ship. But, be careful as unexpected dangers may await you there.

The very appearance of the ship may confuse brave defenders: conventional rooms and corridors are rare here, and monsters can assume the most bizarre and unbelievable forms. Yes, Aelion’s young gods will marvel at the wonders of another world, but that distraction may cost them and their allies their lives. If they do manage to explore the ship and stay alive, it may still too early to celebrate. At the end of their journey, they will need to defeat the avatar of a great god. These creatures carry a particle of their leader’s soul, and part of their power. It will not be easy to take them out: powerful in their own right, cunning traps, mysterious magic and alien technologies provide them with a strong defense. It might take Aeloion’s defenders several tries to defeat them, but if you destroy the alien ship and eliminate the avatar, the reward will be well worth the effort, and your group will be a force to be reckoned with. And, who doesn't want to appear on the honor roll?

Heroes that deal with the avatar most efficiently will be able to prevail in a champion’s battle. This is a special raid adventure with a new, stronger avatar. Here, even the slightest tactical mistake can deprive you of victory, but the winners will receive unique rewards. The outcome of this battle could have consequences for the entire server. After all, the gods are not just immortal heroes. Their actions have an impact on the whole world.

So, you have spent many hours working on a strategy and finding the right people for your team, and eventually defeated the avatar along with his army. What’s next? Besides the fact that your name will be glorified for centuries, you will bring a temporary increase in rewards for the entire server – a kind of gold age for Aelion.

You can fight the avatar on the ship, rescue civilians or find another use for your abilities and participate in group activities or help your friends. You will not be able to stay away from the invasions though. But then, why would you? It is a great opportunity to prove yourself and become stronger as you learn the secrets of the alien armies.

Prepare yourself for events of incredible scale, prepare to defend Aelion! 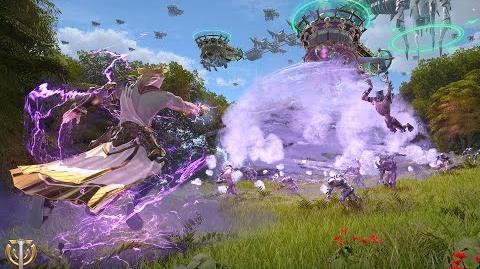 Skyforge - Invasions Trailer
Add a photo to this gallery
Retrieved from "https://skyforge.fandom.com/wiki/Alien_Invasion?oldid=10159"
Community content is available under CC-BY-SA unless otherwise noted.